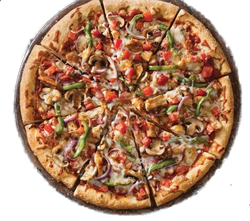 Italy’s gift to the world along with Gina Lollobrigida and the Vespa.

I don’t get it often as the wife prefers things like noodles and tofu or whatever the Loco Moco or Zippys’ special is that day.

Pizza usually only comes my way the nights she’s out ripping up the town with her friends, leaving me and the dogs to keep the home fires burning.

That and an occasional hug from one of the wife’s girlfriends are about the only highlights to my rather drab life.

Well, Dobash Cake, too.
Top of the food chain.

Pizza Hut is going the route of Zippys.
Cut the size, keep the price.

We have established how upset I am with Zippys for that maneuver.

The royal road to profits in the American financial system seems to be centered around making things smaller and charging the same – or more. 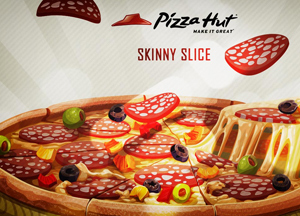 The marketing folks at Pizza Hut are calling it the “Skinny Slice” and it’s being tested in parts of Ohio and Florida.

I shall simplify for you:
Pizza Hut is using less dough and toppings.

The idea is to play to the folks that want a “lighter” menu.

Seriously – if anyone wanted a lighter menu they wouldn’t be eating pizza.

No one wants a lighter pizza.

It’s like lighter ice cream.
There’s nothing there – it’s blah.

History says pizza was invented in an Italian college dorm many years ago when some guys were hungry and the piled everything they had in the fridge, except the beer, on some old bread and cooked it.

The thing was so good the town’s Bishop ordered he be given twelve of those things every Christmas.

This led to the infamous “12 Days of Christmas” where they named each of the toppings after something else.

The idea of eating pizza is to clog your arteries and apply 20 pounds to your waist.
Or your thighs if you put your flab there.

Diet pizza is an oxymoron.

Pizza Hut says it needs to reclaim its market share.

True.
Their pizza was crap up until a couple of years ago when the company admitted it and starting fixing things.

I’m leaning toward thinking they lost market share because of dumb ideas and cruddy pizza.

For a pizza lover it’s enough to make you grumpy.