The wife is preparing for our yearly pilgrimage to Las Vegas, land of lights and riches.

Just us this time.
The entire high school reunion folks aren’t tagging along.

I don’t prepare.
I just wait for the time to leave.

There lies one of the biggest difference between my princess and myself.

She gets into this “**We’re traveling**” thing in a big way. 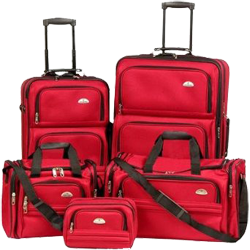 Every time we go on a trip she buys new baggage.

I don’t understand that since the old suitcases have been used just a few times and look just fine to me.

She treats the whole thing like a formal dinner where a new dress is needed.

She and I are having this tug of war over one bag I like.

It’s just the right size, it was expensive and it looks new.

I’m attached to it.

She wants to replace it with something she saw on sale that’s not quite the right size, expensive and looks new.

I guess two out of three doesn’t work in this case. 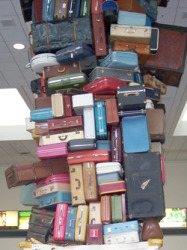 While we don’t travel a lot, you can still imagine how many suitcases we now have around the house.

I go with one bag.
The number hasn’t been invented yet that describes how many she wants to take.

I figure we got enough suitcases to take half of Kahala with me if I knew those people.

I don’t.
They’re too rich and probably have their own bags.

The little lady is also going to Japan with some friends in March and she’s already wound up about it.
I won’t get into that because there’s not enough room here to write a novel.

The dogs and I will stay home and enjoy bachelorhood with pizza and cheeseburgers every night.
I’m a lucky man.

Back to Vegas…
If I hit the MegaBucks then we’d need all those suitcases to bring home the loot.

In that case – the woman’s a genius.