Want a boyfriend but you’re too lazy to get one?

Don’t want a boyfriend but you’re tired of people asking when you’ll settle down?

Lucky you – there’s a new service on the Internet.

The Invisible Boyfriend.
They have girlfriends too.

You sign up for $25 a month and various people will text you pretending they’re your boyfriend (or girlfriend).
You can now wave around your cell phone saying, “See! I got texts! I am loved!”

This is either genius or a sad comment on the world today. 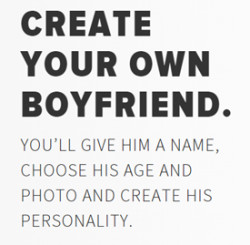 You tell the company the name of the supposed boyfriend (or girlfriend).
I sorta like Xwzyski.

Then how they look and stuff they should like.

This flies out to any one of hundreds of freelancers who are getting a few pennies to send you a text that matches your specific expectations and fantasies.

Every text to you comes from someone different playing the part of Xwzyski.

You never know who actually wrote it.
Could be another lady or an old coot like me.

You can get 100 a month and that’s a lot of mushy stuff from other people all trying to be what you said you wanted.

And since it changes depending on who is writing the text each time there can never be, you know, an actual conversation.

This is really weird.

I’m really having problems getting my head around it.

Some people have gotten attached to their mystery person at the other end.

I heard of a guy once that was in love with his toaster.

And there are people who married their dog.
That I can see.

My wife once said if the dog I had at the time was human I’d probably marry her.
True, except I wouldn’t be happy with a wife that bites and poops on the rug.

A guy in Japan married his computer.
I won’t get into blow up dolls or other things you find in little stores down a dark alley.

The whole idea of this Invisible Boyfriend is to fake out your friends and relatives so they stopping bugging you to settle down.

Actually, I find telling them to mind their own business works well.
And it’s a lot cheaper.

Take the money you save and buy a good toaster.

Enough to make you grumpy.