I love stuff on the internet.

I find things no self-respecting newspaper would touch.

That of course, leaves out the British tabloids, but they are more focused on the Royals.

Maybe the TV news would, but if there’s no video they’re stuck.

I learned more than I ever wanted to about cow farts.

Sorry, flatulence.
I realize there may be people with sensitivities reading this stuff.

The scientific side of my brain was thrilled to learn the average cow poofs out enough methane in one day to run a refrigerator for 24 hours.

How great is that to know?

You now have a conversation starter at your next cocktail party. 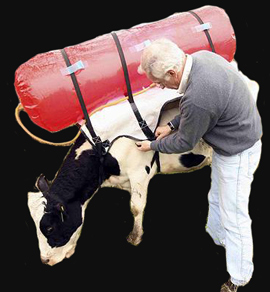 People will look at you in amazement.
One way or the other.

There’s a bunch of scientists in Argentina who stuffed tubes up the rear ends of some cows to collect the gas and put in tanks.

Can you imagine what led up to this wonderful experiment?

“Hey Carlos, I have a cow outside and some leftover tubing. Let’s see what we can do with it.”

Anyway, they say they found a way to change cow poofs into fuel.

This is bordering on the magical.

This is a well-known scientific process because they used things like valves and pumps to collect this stuff and put it in some tanks.

I remember when we were doing scientific stuff in engineering school before I took a side trip into the wonderful and glamorous world of radio and TV.

We would pour different kinds of stuff into beakers and watch it foam up or turn color.

This was before someone discovered what happens when you put Mentos into coke bottles, so it wasn’t much fun.

Since I got tired of turning pink stuff into blue stuff I decided to change my education to something that used valves and pumps because I could use hammers and screwdrivers.

Back to their experiment…

Of course there’s a downside.

They say, “As an energy source it is not very practical at the moment.”

As an expert in valves and pumps, I can say with scientific certainty it wouldn’t be easy to strap a cow on the back of your car, feed it a bunch of beans, open some valves and chug off to the mall.

And what about all that other stuff that comes out that end while you’re parked in front of Macys?

There are a million failed experiments for every success.

That’s why many old scientists are grumpy.