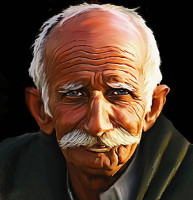 When does one become a Senior Citizen?

I’m 68 and there’s no ducking it anymore.
I’m one by just about every definition.

But when does one actually get the title?

If you believe AARP it’s 50 when it starts flooding your mailbox trying to sign you up.

In some restaurants, it’s when you qualify for their Senior’s Menu, which is designed to sell food not give you a break.

Those Senior plates have less on them than some kid’s menu items.
I guess they think we’re never hungry.

The feds always pegged it at the age you start collecting Social Security, but that number is all over the place these days.

It used to be generally considered to be 65 back a long time ago when that was the mandatory retirement age.

Now, people are working into their 70’s and retirement is looked at as the first foot in the grave.

If it’s when women stop glancing at you, then it’s your mid-40’s.
Unless you have lots of money or you’re famous.

Big companies must think it’s the late 30’s because all their advertising is aimed at people younger.

Older people apparently buy nothing but Polygrip, enemas and Depends.
At least according to them.

How screwed is that?

In Chicago, people over 65 don’t have to pay the sewer charge.
I guess the Mayor figures old folks don’t poop.

Movie theaters give discounts to seniors.
I guess they think we can’t hear the sound track and we’ll be napping anyway.

I guess it’s all in your head.
I’ll forget this whole thing in about an hour anyway.

2 thoughts on “Age is a title”