I have a song stuck in my head.
It’s driving me crazy.

To make thing’s worse, I hate that song.
How’d you like this echoing through brain all day? 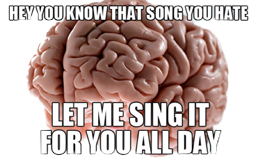 Huh?
What the hell does that mean?

So – this stuff is the secret to a million-seller hit song?

Given my scatological tendencies I have scores of platinum records rolling around in my head just waiting to burst forth on the Top 40.

Come on baby show me glean
I want to watch you strut and preen.
Gimme poom, lemme toon, my nose is a big balloon.
My toes are brown and I’m going to town
Skipping and strutting all around.

Anyway, this thing won’t go away in my brain no matter what threats I make.

It’s like when the party is over and there’s always one person who’s still there and won’t take the hint: GET OUT !

I have studied this and the scientific term is earworm.

How appropriate and how unusual.
Normally they give this stuff some sort of Latin name nobody can pronounce.

This is why doctors go to school for a bazillion years.
Learning the words is tough but then they can talk to each other with no one else knowing what they’re saying.

Today, some docs call it “repetunitis”.

I’m sure they did that just to bring calm to the medical universe.

“My heart is bound to beat right out my untrimmed chest”

Let’s study this for a moment…

Researchers at Dartmouth say when they played part of a familiar song to people, their auditory cortex automatically filled in the rest.

In other words, their brains kept “singing” long after the song had ended.

Sounds like what I got.
It’s also called a brain itch.

Now I got earworm and brain itch.

Scientists say the only way to scratch it is to repeat the song over and over in your mind.

Since this has happened to all of us one time or another you know it’s like a mosquito bite.

The more you scratch the more you itch, and now you’re stuck in an unending cycle of… 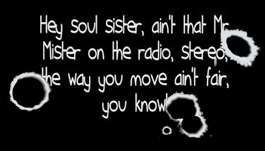 Somebody shoot me.
Please.