I’m not sure whether I’m more interested in slapping some kid or hugging some judge.

Maybe I can work both into my schedule.

Believe it or not – this is a feel good story.

Here’s how I got to this point…

Some high school student – whose name is secret – filed a suit against a New Jersey school district. 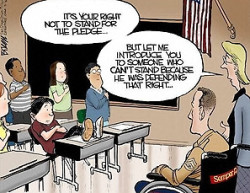 We all know New Jersey is kinda weird to begin with.
But this stretches even that.

The suit said hearing the Pledge of Allegiance in class violated his rights as an atheist.

Something about him having a problem with the use of “under God” in it.

The Judge threw out the suit.

He said protecting students from viewpoints and ideas that may offend or upset them is not and has never been the role of public schools in America.

Then please pass that on to the politicians out pandering for votes.

Damn, I like that judge.
Handsome guy, isn’t he?

That’s because all hero’s are handsome.
Ever see a firefighter that wasn’t handsome?

Of course not.
I rest my case.

Anyway, the judge did not stop there.

He looked at the kid and pointed out how the phrase “under God” appears everywhere in America.

Here’s what he said, “As a matter of historical tradition, the words ‘under God’ can no more be expunged from the national consciousness than the words ‘In God We Trust’ from every coin in the land, than the words ‘so help me God’ from every presidential oath since 1789, or than the prayer that has opened every congressional session of legislative business since 1787.”

As you can imagine, the American Humanist Association, which supported that kid, was not too happy with the ruling.

I suspect junior wasn’t either.
Too bad.

Consider it a teachable moment – we don’t always get what we want.
It’ll build character and prepare him for the real world.

One of their PR folks said that having children recite the Pledge of Allegiance is “discriminatory” and makes atheists feel like “second-class citizens.”

I’m trying real hard to feel bad for them.
Wait…

Nor am I a tree-hugging, ban the bomb, tax-me-lots liberal.

I’m squarely in the middle.

Seems hardly anyone is these days – except for me and that judge.

That’s why I like dogs more than most people. 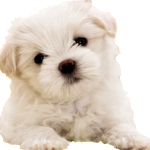 And that’s what keeps me grumpy.