I had a grand time in the TV business.

In most cases the hours are sane, the pay was decent, and you got free coats or aloha shirts to wear if you were at the anchor desk. 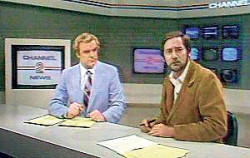 The downside is if you ran out to get something to eat and forgot to take off your makeup, people wondered who the hell is that weirdo.

You may not realize male and female news anchors look pretty strange when they just get off the air.

The lights in the studio are so bright you have to wear very heavy makeup to cut the shine and put color back in your face.

And High-Def TV is a real monster to cover up those blemishes and wrinkles and figure out your makeup without looking like you have too much on.

We used to plaster our own on.
Now most of the stations have a makeup person come do it in exchange for some free commercials.

Back to my story…
If news people didn’t plaster it on, they’d look like dead people.

Don’t believe me?
Look at their hands the next time you watch the news.

No one puts makeup on their hands. 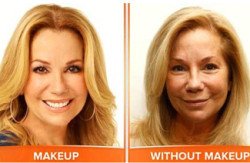 You can see how washed out and pale they are.

Or, check this with Kathie Lee Gifford, with and without makeup the day they went commando on the set.

Women have to be especially careful.

They got eyeliner and eyebrow stuff and lipstick and all this other goop they have to pile on.

The first thing you learn in TV is never – never – tell some lady anchor she’s got raccoon eyes or looks like some floozy all painted up…even if you’re joking.

Do it just once and you’re made an enemy for life.

While I’m discussing my old career…

There was one lady I knew, that as soon as the show was over, she’d run and get the “aircheck” and go watch the newscast that just finished.

She wanted to see how her makeup looked, how her clothes were and if she fiddled with her hands on set too much.

Nothing else.
Just that.

Then there was one who’d grab the tape and a stop watch and go measure how much time she had on camera, versus the guy anchor.

If it was out of balance (against her) the producer got an earful.

She didn’t last long which I found surprising since most news directors don’t care about drama in the newsroom if the anchor was good-looking and did a decent job.

I take that back.
If the anchor was good-looking and didn’t cuss on the air.

The guys can be just as bad, just less vain.
If that’s possible.

TV news has changed over the years.
People used to think we made really big money.

Actually it wasn’t so bad.

Can you believe that?

They don’t know a damn thing about anything but they’re out there trying to explain something they never ran into before.

I’ve never heard a reporter get an airplane story correct unless they were also a pilot.

The only ones making the big bucks are the main anchors but I’m not going to snitch on them.

Let’s just say it can be way into 6 figures.
Not all – just one.

Fun business – if one stayed out of the squabbles.
Not much future though. 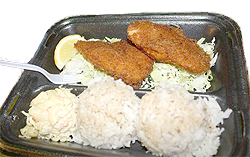 My car has turned in to a technological nightmare.

The car itself is great.
A Jeep looks good no matter how dirty and beat up it is.

The problem is the stuff inside.

I’m a gadget lover.
If electronics flow through it and it looks cool, I want to own it.
So I buy it.

Something that drives the frugal nature of the wife into insanity.

Remember – he who dies with the most toys win.
I’m ahead of the game.
Just look at my garage.

Back to the nightmare.

I have a whiz-bang radio that does everything.
Plays CDs and movies, AM/FM, navigation, weather and a sexy screen that shows everything including a picture of my favorite dog.

And it does voice commands and hands-free phone.
Expensive.

The navigation in the radio is nice but the in-dash navigation is a bit difficult to update so I have the latest Garmin GPS on my dashboard.

By latest – the most expensive.

And the best one they’ve ever made.
The screen is like looking at my iPhone.
Just gorgeous.

And it does hands-free calls too.
Did I mention expensive?

Then there’s this digital gauge that gives me real-time water temperature, battery voltage, RPM and miles per gallon.

Lots of things that makes a man’s soul sing.
It’s beginning to look like the panel of this plane I used to own.

Until there’s an incoming phone call.

Everything starts yelling, screaming and flashing at me.

The Garmin GPS starts flashing its expensive screen and some lady’s voice is announcing, “You have a call. Press accept to answer”.

The radio unit starts blaring, “You have an incoming call” and things start flashing too.

I swear it’s information overload.
I feel like I’m in the Matrix.

Yesterday I answered the radio so today let’s answer the GPS.
Press accept.

Now the radio and the GPS start fighting for who actually gets to take the call.

People at the other end say I sound like I’m mixed in with two cats fighting over a mouse.

The cure is turn one of them off.

That would defeat the purpose of owning all this stuff.

It’s enough to make someone grumpy.