This might as a surprise to some but it appears I am a voyeur at heart.

I never knew this lurked within my pristine and beautiful soul. 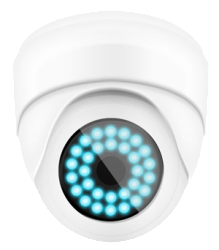 I recently installed a bunch of video surveillance cameras around the house.

You never know when the bad guys will come.

If the law won’t let me shoot them – at least I can get their picture for hanging at the post office.

Most of the cameras are pointing at boring stuff like doors and empty rooms.

But one shows my driveway looking out to the street.

This is so it’ll catch the delinquents driving by checking things out at 2 in the morning or checking out the wife’s car in the driveway. 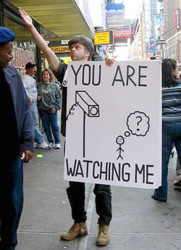 I’m finding myself staring at my monitor much of my free time just watching the road.

I could step outside the front door and do the same thing, in better color, but this is mesmerizing.

I should get a life.

This could be the 21st century version of the front porch chair.
If I had a front porch.

I feel like the guy in the Matrix or some weird movie about a psycho peeping tom.

The wife gets to pull out her phone at work and check the cameras to see if I’m throwing a party.
Gotta fix that.

We’ve come a long way from where no one locked their doors when I was a kid.

We could play in the street until 9 o’clock and not worry about some maniac teenager on drugs doing wheelies down the road.

The only traffic was the mosquito truck and it was great fun running behind it breathing in the oily DDT stuff.

Of course they got banned because the oily DDT stuff would kill you.
But it didn’t. 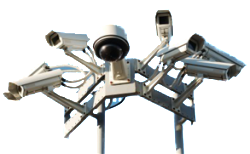 Now if my network goes down and the cameras die I get all crazy because I can’t see what’s happening in the world outside my house.

It was all started by some florists in the United Kingdom as a way to drum up business in the 18th century.

Then candy makers got involved.

Then America and Macys and Zales jumped in.

And things got out of hand which means it was a commercial success.

But its history goes further back.
Let’s look, shall we?

It was a cold and crappy day.
Gork was headed home after failing to snag a dinosaur for the family dinner.

He knew he was going to catch hell from the lady of the cave for coming home empty-handed.

The last time this happened he found some berries and escaped sleeping in the bushes outside.

No berries to be seen. 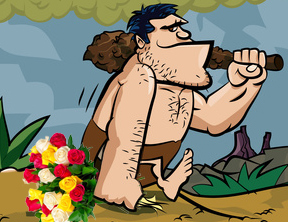 But there was a flower thingy nearby.
Maybe if he took a few back they could eat them.

Grok wandered into the cave with whatever passed for “Honey, I’m home” and waited for all hell to break loose.

Mrs. Grok took one look at him and said whatever passed for “Oh, how lovely” and went looking for a vase.

He dodged the bullet.

But, being dumb as cavemen were, he forgot all about it. 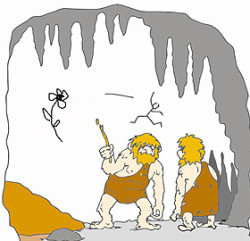 Grunt, the eldest son, thought the whole thing was funny and scratched some pictures on the cave wall.

Ten-thousand years later a florist on a hike found them.
The rest you know.

Not everyone thinks giving candy, flowers and jewelry is wonderful.

In Japan there is a group planning a protest march in Tokyo on Valentine’s Day.

They say the event is a cynical money-making ploy by “oppressive chocolate capitalists”.

By the way, the name of the group is Kakuhido, which translates roughly as the Revolutionary Alliance of Men that Women find Unattractive.

In other words – men that can’t find a girlfriend or got dumped by one.

Anyway, back to Valentine’s Day.

Guys are supposed to give gifts to women.
There’s nothing in the rule book about her giving stuff to men.

Except in Japan (again) where women give candy to guys.
The big deal there is trying to figure out how much candy to give each person.

Then in the 1980s the whole thing changed.
A candy company started March 14th to be “Reply” or “White Day”.

Now Japanese men are expected to return the favor to those who gave them chocolates on Valentine’s Day.

Here’s the kicker – they are expected to return gifts that are at least two or three times more valuable than the gifts they got on Valentine’s Day.

No matter what you think – I’m a married man and this makes me an expert at this stuff – don’t forget Valentine’s Day or you’ll get the silent treatment.

The disadvantages vastly outweigh the advantages.
Trust me.

All of this is way too much information, isn’t it?
I made you grumpy.

Welcome to my world.