One wonders what goes through some people’s minds before they make a decision common sense says will blow up in their face.

We certainly have plenty of examples in Hawaii.
You may call it the State Legislature, thank you. 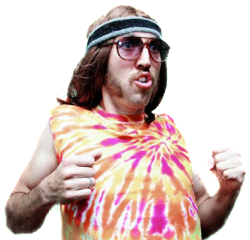 But for this one let’s travel to Washington State, that hotbed of liberal, environmental wacko, Seahawk craziness.

I lived in Spokane for a few years back in my youth and survived a winter where it once snowed 80-inches in January alone.

It’s pretty and clean and if you like trees, it’s heaven.

All that is leading to this…

A school district has decided the game of tag can hurt the emotional well-being of the little ones.

So, the Mercer Island School District banned the game during recess.

Good grief – what else can you do during recess?

The kids told their parents.
They started raising hell.

The school district says the reason for stopping tag is to protect the “physical and emotional safety” of the little kiddies.

Are kids today such wimps that they become traumatized while being chased in a game they want to play?

There’s more –
They also mentioned physical safety, saying children need to keep their hands to themselves.

Let me work on this for a second…
A pat on the back in a game of tag might make someone…mildly uncomfortable?

This doesn’t make a lick of sense, especially when you measure it against the other activities the school has.

Football, which is like tag only instead of gently touching someone and saying “you’re it,” students beat the hell out of each other.

Let’s not ignore wrestling where your hands are all over each other.

We’re raising of bunch of pansies by trying to protect children from everything.

When I was a kid I fell down playing – a lot.

I’ve actually fallen down as an adult.
But that’s a different story.

Anyway, my mother put a band-aid on it, gave me a kiss and I ran outside to fall down some more.

In fact, scientists says it’s actually good for children to get a bit banged up.
It exercises the immune system and they will be healthier adults.

Some grownups need to grow up. 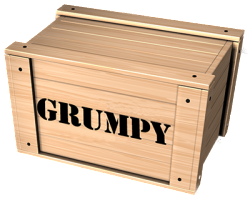 Dragging out my soapbox…

There’s a certain class of people who you’ll find in any country.

We all know a few of them – at least.

They work the system for all it’s worth.
The world owes them.

In their mind, they’re “special”.

They cut in lines, cheat, lie, steal and probably are unemployed because of all that.

They don’t care what you or anyone thinks.
Because they’re “special”.

My case in point:

We’re looking at a big turkey en route to its plane.

This was spotted on a Delta flight and was listed as a “support animal”.

Yup.
Someone needed their turkey with them so they could feel good about themselves.

So how did this jerk get away with it?

She arrived at the ticket counter with a fist full of signed stuff saying the turkey was indeed her emotional support animal.

Bet she’s fun on a date. 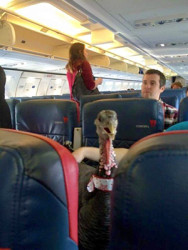 Delta had no choice because the Air Carrier Access Act allows service animals to fly on planes and the law says they can’t be removed simply because other passengers don’t like it.

Another home run from Congress.

While you are digesting that, may I be the first to inform you that horses and pigs can also fly that way.

No snakes and other reptiles, ferrets, rodents, and spiders.
Thank goodness.

All the airline has to see is some letters from a mental health professional saying you need your animal to function as a normal human being.

You can get those about anywhere on the internet for $25 up to a couple of hundred.
Try here.

Now, the animal can’t walk around the cabin, or poop in the aisle or sit by an emergency exit.
Otherwise – welcome aboard.

Now, here’s the sneaky part.
You’re flying to the mainland and want to take your elephant?

It’s very expensive lugging him in the cargo hold so just claim him as your service animal and he gets to sit with you.

How many people you think have done that?
They’re “special”.