There’s another wonderful scientific study that been released.

They’re just popping this out this month.

And like the many of those before it, it tells me nothing I didn’t know before.

I must be the smartest person in the world.

This study says different things make us happy depending how old we are.

Yup, they spent money on that.

These scientists rounded up a lot of people for a lot of time to figure this out.

If you’re young happiness comes from falling in love, getting your first car, or watching your newborn.

What they didn’t mention is unhappiness follows when your love breaks your heart, you have to start making car payments and your kid starts getting in trouble.

Anyway, back to the report.

As for us old folks…

We supposedly get our happiness from just stopping and smelling the roses.

This is true.
Some old folks I know are happy just to wake up in the morning.

The folks at the University of Pennsylvania and Dartmouth spent a lot of time finding this out when they could have just asked me.

What they discovered is probably what you knew already, but it’s not official until someone does a study and spends time and money to find out for themselves and then publishes it in some official journal. 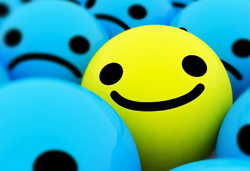 Young people are happy when they get excited, enthusiastic, and turned on.

Remember “turned on”?
I don’t.

And us old folks are happy when things are calm, peaceful, and not all fired up.

The bones get creaky, it takes longer to do some things, there are too many pills in the medicine chest and people drive us crazy.

But the older you get the more aware of who you are, and you have more time to enjoy the smaller, ordinary things that fill your days.

And yeah, our mortality is our lurking around the corner, which probably explains sniffing things.

The problem with this scientific study is – they also say people are either happy or sad, depending on their personality and disposition. 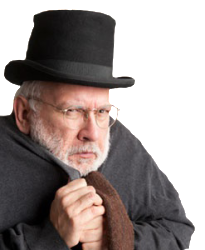 Remember that – you are what you are regardless of how old you are.

There goes your excuse. 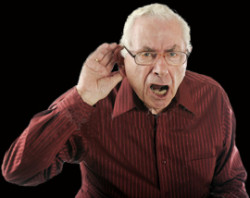 The wife thinks I should get a hearing aid.
I pretend I don’t hear her.

Of course she says that proves her point.

There’s a difference between ignoring and not hearing.

I will admit I do have a small hearing deficiency.

It comes when you get older and things get rusty and the moving parts run out of grease.

I have a couple of fans, a lawn mower and one dog in the house like that.

My doctor says the ear is full of stuff with strange names like utricle and saccule and they all move together in mysterious and wonderful ways.

The lady is a scientific genius.

Then there’s the small thing of a decade being a disk jockey with my headsets at full volume.

Okay, that can knock a few high frequencies out of my stuff that move.

But I’m not deaf.

Outside of confusing words that star with C, D, E, G, P and sometimes Z, I do fine.
When I have problems with half the alphabet, I might rethink my position. 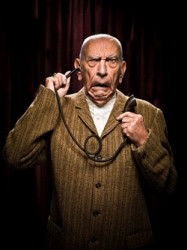 But a hearing aid?
Seriously, why would I want that?

What’s it do?
It makes things louder.

I can’t hear you?
Speak louder.

Problem solved and look at all the money I saved.

You’d think this would make her happy because her frugal nature.

Also, I’m showing some fiscal responsibility for once in my life.

Nope.
She wants me to hear every word when she gets into one of her lengthy, go-on-forever stories about she and her girlfriends swapping gossip at lunch, including what they wore, the complete menu and her 3rd grade report about growing beans.

I’d rather buy something shiny with lots of moving parts instead of a hearing aid.
Sticking anything except a finger in my ear sounds weird to me.

Considering the inane stuff some people have to say, a man-toy sounds like a better buy.

If she wants me to hear her, just speak up.

Of course that makes her grumpy.

Too bad I can’t hear her.

I ponder my youth and wonder…
What the hell was I thinking?

If you’re somewhere around middle age, there’s sure to be more than one thing you did back in your tender years you’d rather not remember anymore.

I got boxes of that stuff.

I’d share some of them but I have successfully suppressed that stuff over the years.

Memory is a wonderful thing.
Twist it enough and you’ll change the bad memories to good.

Delusion is great.
All I have left is the good stuff.

There is this one thing…

This was back when I was in radio – as a disk jockey before I moved to news.

KGU was still on the roof of the old Advertiser Building and the station was #1 after Aku got off the sir.

The Advertiser had some sort of artsy museum department that put on shows off the main lobby.

One day I came in and noticed a bunch of really strange stuff on display.

An idea was born.

The newsman and I gathered up about 500 feet of used recording tape, some pieces of styrofoam from a garbage can and a couple dozen used chop sticks from the lunch room in the building.

We snuck into the display area and found an unoccupied corner where we piled the tape and styrofoam about 4 feet high.

Then stuck the chop sticks in random places.

It fit right in because it was as ugly sin and so was all the rest of the stuff there.

We had a lot to giggle about on the radio that day.
Life was good.

The next day we went down stairs to check things out, and I’ll be damned.

Our piece of junk had a ribbon on it: “Second Place”.

I may have missed my calling in life.

The reporter covering the show also listened to the show and she spilled the beans.

They took our ribbon back.

That’s when I started getting grumpy.