I have made a major scientific discovery that is sure to make the cover of some magazine.

MAD would be nice.

You should not be surprised that every computer has hidden inside a special chip no one talks about.

Its entire purpose is to drive you crazy.

I have given my usual several minutes of thought to this and here are my conclusions:

This computer chip measures your stress level and the higher your frustration, the more mischief it will cause.

Stay with me here…

This is not the chip the NSA puts in there to track everything you do.
That one has a tag that says, “Remove under penalty of law.”

This hidden one messes things up more and more the madder you get.

If you’ve ever used a computer you know I am dragging a well hidden secret into the light for all to see.

No secret is safe from me.

Think back to many times your computer has just stopped.
You will realize it’s in proportion to how important the work was at the time.

Everything always starts out just fine – but under deadline, your project becomes an exercise in frustration.

Out of nowhere it screeches to a halt and stuff disappears.
**poof**

You pound on things and press all the keys and it starts up again, only to show you some silly screen saying you are in big trouble.

It’s downhill from there.
You might as well quit and go take a nap.

This has happened to everyone.
You know it.

This secret chip is known to only to repair people whose middle name is “Geek”.

When you bring your computer in they tell you to come back in 3 days.

The guy goes then goes surfing and plays pool.

The morning you are due to pick it up, he pushes a strange 6-key combination and the chip is reset.

And that’s why so many people are grumpy.

Science finds the answers to everything.

Once I get past the turkey, it’s wonderful.

Since I rarely ponder my blessings at other times I shall list a few now in no particular order: 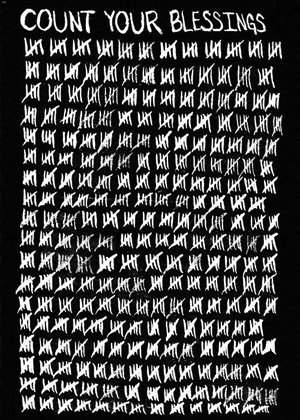 1) A wife that puts up with me 90-percent of the time. The other 10-percent I try to forget because it’s usually my fault. Mostly. Sort of. Once in a while. Occasionally.

2) I have a job I actually like and some very talented people who make me look good. There are a few lazy ones but all-in-all I’m a lucky guy.

3) I’m still waking up very day. At my age some would say I’m beating the odds.

4) The wife’s girlfriends who freely hand out hugs when they see me. A few don’t – their loss.

5) A couple of long-time friends. We may see each other only occasionally but we are there for each other no matter what or how long it’s been.

6) A sister who has been married for something like 50+ years to a great guy. They are the most special, decent people you could ever meet.

7) A dog who was (is) my best friend for almost 16 years. I’m still very sad she died but more happy that we had each other for a long time.

8) I recovered successfully from a few really stupid things I did in my youth thanks to some understanding people who gave me a break.

9) I never lost my curiosity.

There’s more but I need a nap.

Count your own important stuff.
I’m sure there’s a lot.

I have to gear up for Thanksgiving.

It demands attention to detail, good manners and an iron stomach, all things I have in abundance but usually ignore.

Sometimes I’m expected to hang out with people I see only once a year, be pleasant and eat until I gag and require help from the fire department to get up.

The visitor’s are all working their cell phones so I just wander off and watch football.

We all have our traditions and mine’s going off in a corner.

I really am sociable but I’m also a loner by nature.
The wife likes it because she goes out with her girlfriends a lot and I don’t grumble.

They probably think I’m being grumpy.

That’s not true, but my conversations often center around, “What’s for dinner?” and since that’s already answered, there’s nothing left to say.

We’ll all get together again next year and do the same thing.

I’m not talking about the purpose of Thanksgiving – getting together to express thanks for what we have. 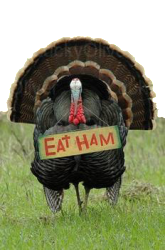 I’m talking about the bad thing about Thanksgiving – eating turkey for weeks afterwards.

I’m eating that stuff for as long as the leftovers remain in the refrigerator and the wife is dishing them up.

I’ve had Turkey Ala King, turkey sandwiches, turkey salad, turkey casserole, turkey pie, turkey soup, steamed turkey, fried turkey, microwaved turkey and several dozen other variations that have yet to be given a name.

Just about the time I want to kill myself if I eat anymore turkey, we do the same thing for Christmas but she also throws in a ham.

The one saving thing is the science of natural selection and that the turkey has evolved over thousands and millions of years to ease my pain.

You see, turkey contains tryptophan as you can see by the scientific diagram.

That stuff makes people sleepy.
Scientists call it an essential amino acid, as demonstrated by its growth effects on rats.

If they ever need more, I got one hanging out in the back yard as evidenced by the wife’s screams some nights.

That’s why Thanksgiving Day everywhere are households of people sitting around looking blurry-eyed and talking nonsense like shopping strategy for Black Friday.

As for me, I hear enough nonsense at work so I’m off sleeping somewhere in front of the TV tuned to football.

I consider this practice for one of the most valuable of business skills – dozing in meetings with my eyes open.

Since most meetings at work run an hour or so, and most of them start repeating after 20 minutes, I can usually get a 40 minute nap while someone is droning on.