Here it is.
The witching hour.

The stroke of midnight on the East Coast and Congress has turned into a pumpkin.

A rotten one at that.

It makes no difference if you’re a Democrat, a Republican or a wacky Tea Party nut case, you’re all wrong.

The Democrats are trying their best to make everyone else look foolish.

Here’s some advice – it’s not working.

The Republicans have now voted 40 times to try to stop ObamaCare.

Here’s some advice – give up.

The Tea Party is willing to destroy damn near everything in its drive to remake the country in its own vision, whatever that is.

Here’s some advice – go away.

Here’s your chance – explain why your side is right and the other’s are wrong.

I’ve been watching the circus in Congress the last few days.
Yeah, I need to get a better hobby.

It brought back memories of my time working with politicians.
I’ve worked with and for many over the years.

Only a few I ended up liking as a person.

Too many are focused on only themselves and the next election.
And more than a few are mean, nasty people when the door is closed.

There’s something that draws these types of people to public service.
For some there’s a need for public adoration – the need to be loved and looked up to.

It’s an outsized ego that is constantly fed by those around them.

Unless you’re a paid staffer, you are a volunteer and you’re there because you “believe” and tell the politician that constantly.

Hear that enough and you start to expect it.

Politicians surround themselves with loyal people.

People who are believers in the “vision”, won’t talk behind their back and can be counted on come re-election time to help with the campaign.

Someone you can safely throw a tantrum in front of, share ideas with or do dumb things around without it showing up on the front page of the newspaper.

If all of a sudden you, as the new governor, had 1,000 jobs to fill, you’d want people you trust filling them.

People who are loyal.
One of the most prized things in politics is loyalty.

The politician gets up in the morning, looks in the mirror and says to him or herself that they are the only one that can fix the problems facing a country, state or city.

Of course that’s baloney, but that’s the thought process.

Some politicians I’ve known demand they get their name in the paper every day.

Some demand that a press release on their great work be sent daily.

After a while they start believing their own publicity.

And when they get into office, I found most are lousy managers.

It’s a different skill set and few know how to get the best from their people.

Some manage by fear and intimidation, with an eye only on how they will be perceived by the voters.

After all, there’s a re-election down the road.

Just remember – for every nasty negative ad, there’s a politician approving it.

I was lucky in that I was perceived as competent at what I did and I also knew a LOT of very important people who might be helpful to them.

Treat me bad and they’d worry I could cause them all sorts of political trouble.

I would never do that but not denying that possibility kept the stress level way down for me.

It’s important to know that some politicians are there for the right reason, although far too many are not.

I know just about everyone in office and the great ones can be counted on two hands.

Many people think all politicians are crooks – except for the one they voted for.
And that’s how they keep getting into office.

The founding fathers never expected politics to be a lifetime job and one that should be held by regular people, not just lawyers and certainly not forever.

This is political as I’ll get.

The wife says I should write a book.
No one would believe any of it if I did.

There’s no way to save up brownie points earned with the wife.
Any husband will tell you that’s a universal truth.

You only have to be grumpy once to wipe out all the good stuff you’ve done over the previous weeks, months and sometimes years. 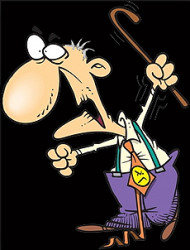 This is the big difference between men and women.

My guy friend gets grumpy on me – I forgive it because he once bought me a beer.

I get grumpy around the wife for 10 seconds I’m in deep trouble because she reminds me I was late picking her up once back in 1995.

If that doesn’t work she has a long list of others transgressions she’ll gladly drag out from some dusty brain area where this stuff is forever stored.

Some going back to the Last Supper.

If her girlfriend gets her upset, all is well 10 seconds later.

The only reason must be our brains are wired differently.

She calls me a grumpy old man.
Of course I’m not.

If fact her girlfriends think I’m delightful but I, of course, was never late picking them up before.

You would be grumpy too if you were old and all your parts don’t work as well as they used too.

But the fact is most old people aren’t grumpy.
We just look that way.

That’s what gravity does after 60+ years.
Things get pulled down.

Catch us standing on our head and we look pretty good.

Many are hard of hearing.
Too many years of rock-and-roll at the pain level.

Old people aren’t ignoring you – they don’t hear you.

As for me, my hearing isn’t as bad as the wife thinks.
Sometimes I’m just tuning her out.

When she’s nattering on about one of her girlfriends sanity demands I turn if off.

Other times I’m concentrating on something and it’s like she’s on another continent.

It’s amazing how she scolds the grandchildren not to interrupt someone when they are busy but I suspect that doesn’t apply if you’re over 18.

I realize that doesn’t explain the go-to-hell rudeness some old folks throw your way.

I suspect they were rude people all their life and now they don’t care if it shows.

Here’s the scientific reason: only the good die young so all that’s left are the crabby ones.

Since old folks don’t see, hear or move well, most people ignore them and that makes the grumpy, loud ones stand out.

I’m not grumpy – but the trouble is, you only have to be grumpy once to wipe out your entire reputation of being wonderful.

Now, get off my lawn.