Years ago when I was in radio and doing news on KGU we had a traffic reporter. 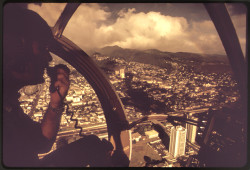 Why is because K59 had Captain Irwin flying his helicopter and doing traffic.
K59 is now KSSK.

It had real live stuff from 500 feet over the action.
Yeah, it’s a crappy picture but the only one I have.

All this was happening when KGU was still a real radio station, but poor.

Anyway, someone decided the station needed a traffic helicopter too so it wouldn’t lose afternoon traffic listeners to Captain Irwin.

Meet Roger Hedges.
I don’t have a picture of him so enjoy this one of someone else. 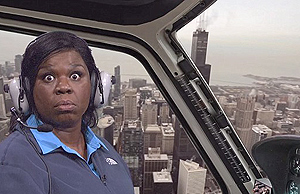 The rest of the time I think he sold real estate.

The problem was – the station didn’t have a helicopter.
It couldn’t afford one.

He’d go into one of the small studios listen to Captain Irwin’s report then get on the phone to the guy on the air.
Usually me.

He tuned an AM portable radio to static and put it near his mouth.

He would started beating on his chest for the sound of the rotor blades and make his voice sound like he was riding in the sky.

It was marvelous.
It sounded like the real thing.

We thought it was so funny we’d almost barf.
Hey, I was young at the time.

Everybody thought we had a genuine helicopter with a genuine traffic reporter watching over them.

People would call up and ask if Roger could fly over a certain area to report on what was happening.

Glad to help.
If Captain Irwin didn’t have a report on that – Roger would just make it up.

Radio is theater of the mind.

According to those who know this stuff – most of us are sitting here grumpy because it’s Monday. 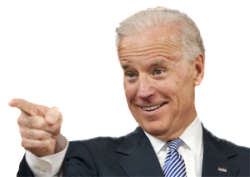 Monday sucks.
Raise your hand if you agree.

I rest my case.

Nobody likes Monday except strange people who also like getting up early, pulling weeds and are positive and smiling all the time.

People like that drive folks crazy.
Especially on a Monday.

Old folks don’t do any of that stuff because parts could fall off.

You did one of two things: 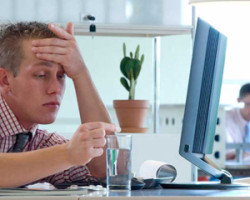 Spent the weekend partying and now you got to go act professional, or…

Spent the whole weekend by yourself and now you have to go socialize.

Everything you ignored last week is still sitting on your desk and you bet the boss is going to be asking about it.

You know you’re going to fib and say it’s almost ready.
You just need a few minutes to take one final look through everything.

Better to get to work real fast.

And scientists say most women feel the least attractive on Mondays.
Maybe it’s the bags under the eyes from partying.

One doesn’t need to be a scientist to see those.

Not to put a damper on your day – but Mondays are also the most common day for people to suffer heart attacks and strokes.

A scientific survey done a while ago found people spend more than a half hour each Monday complaining about Monday. 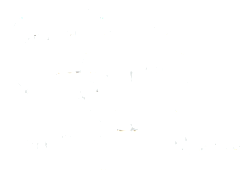 This was usually in the morning before they got too tired to whine any more.

And most people appear to cruise through Monday.

That means the work you ignored has now got to be done the next day.

Actually, the study found Tuesday to the worst day of the week because 20-percent of the people worked through their lunch and stayed late to catch up.

Most people don’t realize Tuesday is the real pits.

Now you do.
Glad to help.

We have a separate class of people in this country.

Yes, America is not class-less.
No matter what they taught you in school.

Surprised?
You shouldn’t be.

Let’s start at the beginning.
Do you cruise the Internet for news?

Of course you do.
Everyone does and that’s why newspapers and TV news are going in the dumpster.

Now, have you ever spent a little time looking at the comment sections of news stories on the Internet?

Probably not since that section seems to be populated by idiots and fools.

Of course that certainly includes none of the readers of this upstanding column.

You should try it.
Just for fun.

You’ll be amazed – and stunned – at the racism, anger and stupidity mixed in with crappy spelling and poor English.

More surprising is if they were forced to use their real name – you might know a few of them.

The whole idea of having a section where people can comment is the news organization thinking participation will foster loyalty to the brand and customer involvement and keep you coming back.

Intelligent discussion of the event is secondary.

What a real dumb idea that turned out to be.

It’s even dumber that they allow it continue.
A reasonable person would probably agree it’s a failure on every level.

Very few of the remarks you’ll see are worthy of any thought besides “ewww”.

Without fail these comments seem to degenerate into you vs me with each side hurling stereotypes at the others.

Let’s look at comments posted on our own Star-Advertiser.

Some selected samples from a recent story about the new telescope construction on the Big Island:

Thank you DNLR for doing your duty and arresting these violent radical racial supremacists from their obstruction of this amazing project.

Who said they were violent besides being racial supremacists? Do you know something we don’t?

How many of the protesters really understand the religion they profess to belong to? They are all such racist but always accuse others of being racist. Happy they were arrested.

Most are mainland folks hon. They constantly look for some cause to redeem their lives. Most Hawaiians know that ancient Hawaiians were favorable to tools and technology and were proto-scientist who wanted to figure things out and adapt.

Are you a chronic liar or just someone who goes and post things you know nothing about.

Just because you’re a total phony and everything about you is lie does not mean others are. take the time to google them they do not hide who they are and what they stand for.. Hawaiian held thing scared and honor them also. you like to talk about thing you know nothing about.

This stuff is fairly tame compared to what you’ll find on the LA Times or Washington Post.
Makes one want to throw up.

Can you believe these are mostly Hawaii people writing this crap?

Yeah, the internet brings out the worst in people.
They write things they would never say to a person’s face.

At least not mine.

Damn this makes me grumpy.
It should you too.