I’ve done it and I’m done doing it. 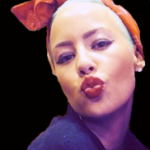 I have complained about selfies in the past.

Mostly because women who do them make duck lips and guys throw gang symbols with the hands.

We were out having lunch with my niece and her husband who were ending one of their frequent trips back to the islands.

The wife, who constantly embarrasses me by asking waiters to take our picture, was doing it again.

The waitress (alright, lady server) tried but obviously pointing a camera and pressing a button was not in her skill set.

I said gimme the camera and I’ll take it.

We needed to get this over so I could get back to eating.

I took so much from the salad bar I was worried they’d come to my table and take it back.
The best part of Ruby Tuesday.

First I pointed it away from us and I’m sure I got a wonderful shot of the restaurant wall.

Oh yeah, press the button to use the front camera.

I knew that because it seems the entire restaurant was yelling that to me.

She goes and posts it on her Facebook page and then tags my name with it.

We’re no longer taking to each other.

And no more dopey selfies. 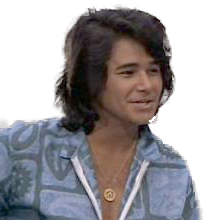 Back when I was a radio guy I met Sam Kapu.

Sam sang in Don’s show and then became a radio guy.

But back then he sang in the Don Ho Show when it was on Lewers Street in Waikiki and we became friends.

Don Ho had a pool table back stage.
Sam and I ended up playing pool most nights after the show.

I learned a lot about live shows during that time.

Stuff like you always put the pretty ladies in the front row.

Today you do that for the TV cameras.

Back then they did it so the stars of the show could have some eye candy to sing to.

After the show, Don Ho used to throw open his dressing room for folks to come and say hello and the ladies get a kiss.

The line was a hundred people long. 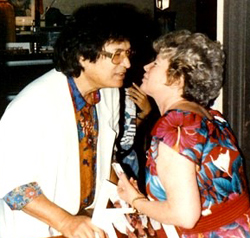 I bet he kissed a million women over his career.

Some were pecks and some were like a Vulcan Mind Meld of the lips.

The man was amazing.

The best ones to watch were the female Japanese tourists that flocked to his show.

Tiny Bubbles was always a big hit there.

They were nervous and very polite as they approached him standing there in his robe.

They’d start to bow, he’d grab one at a time, pull her into his arm and lay a big one.

The ladies would almost swoon and exit on wobbly legs.

“Next” – they kept the line moving quickly.

Did they hate it?

I doubt it.
Many were back the next night.

This was the real show for us.

Then it was back to the pool game.
Eight ball in the side pocket.

There was some other stuff going on but I’m not going to throw it around.

The wife would get grumpy and kill me. 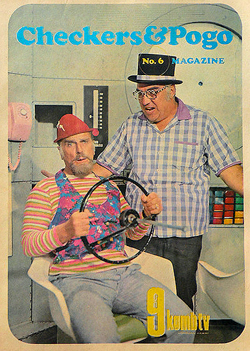 If you’re really old you probably remember Checkers and Pogo.

They had a kids show on Channel 9 for years.

Practically everybody who worked at KGMB radio and TV took part in the show in one way or another.

Frankly, I don’t remember what I did.

Something to do with a dog costume and a lot of around jumping around I think.

But what I did is not what this is about.

Checkers and Pogo made a bunch of public appearances and were in just about every parade.

You had to be living here to really understand what a big thing their TV show was at the time. 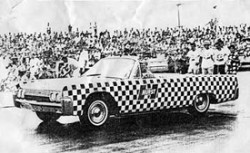 They drove around in a Ford convertible that was painted in black and white checkers.

Maybe the most famous car in Honolulu.

Checkers drove it all the time and kids flocked whenever they saw it coming down the street.

One day KGMB decided to buy them a new car.

The old one was in perfect condition and well cared for – but it was time.

They got the new car and a sign went up on a bulletin board in the station.

So I did.
I now owned the Checkers and Pogo car.

I drove it home and people in cars and along the sidewalks were waving and yelling and I wanted to hide.

Good grief, I’d never be able to go to the hoochi-koochi bars with the whole town seeing me coming and going and thinking it was Checkers out ruining his reputation.

I didn’t have one but he did and I wasn’t going to ruin it with my hanky-panky.

So that weekend I bought 10 gallons of paint remover and poured it over everything and scraped off the checkers.

Then three coats of grey primer went on and I was incognito again.

Looking back on it – I’m surprised the skies didn’t open up and a bolt of lightning fried my butt.

The thing belonged in Bishop Museum or some place like that.

It was like smearing paint over the Mona Lisa.

At the time I didn’t think anything about it.

It was a great car.
Ran perfectly and looked like it just came off the showroom.

Except for the grey paint.

I had great times in that car.

Many of which I would be horrified to talk about today.

I eventually traded it in when I bought a new car.
The sales guy didn’t believe me when I told him who owned it before.

The whole thing reminds me of a certain Seinfeld episode – if you’re old enough to remember that one.