Another cherished tradition in Hawaii is going down the tubes.

If I wasn’t grumpy already it would make me that way. 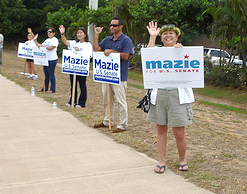 The people who sign wave for politicians are not having fun and we have to fix that.

These people are only having a little bit of fun.

First, wonder where they come from?

Most are supporters, family members, bored old people who have been nagged by friends.

Some are union members who have been assigned a morning or afternoon to wave signs for one of that union’s endorsed candidates.

Over the last couple of weeks I’ve come to a decision:
The sign wavers  on Kam Highway must really hate what they’re doing.

Where Kam Highway splits and heads up toward Mililani is a nice, prime piece of real estate.

Whoever gets there first in the afternoon can stake their candidates claim to all the cars going by. 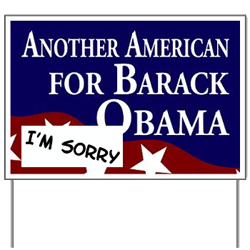 Since I travel past this bit of grass every afternoon I’ve seen a good sample of signs for just about everybody running for some office or another.

No one has done much more than stand there.

And no babes.
Yup, you must have some babes.

That’s in the rule book, somewhere.

What we have is small groups of bored people looking at their watches.

Sometimes they sit under the only tree with their signs stuck in the ground or propped up against something.

Yes sir, that’s how to get folks to vote for that person.

Sign waving is a time-honored tradition in Hawaii and I’ve certainly done my share for the Mayor, the Governor and a few council members.

Here’s how it’s supposed to be done.

Listen up so you can pick out the pros from the deadbeats as you drive by.

1) You better show up all ready to go. Or go home.
You’re supposed to be enthusiastic.

2) You are supposed to WAVE.
That’s the waving part of sign waving.

3) The trick is look them in the eye as they drive by.
Give them a shaka or wave just to them.

4) Sometimes it works good if you point to the driver and then wave.
No one can ignore someone pointing at them.

I found you can also mouth a few dirty words with them thinking you’re saying something friendly.
That’s good fun and makes time fly.

If you don’t do that you’re hurting your candidate.

One time some friends and I stood along Kalanianaole Highway dressed as clowns and a jack ass.

I was the jackass.
Typecasting at it’s finest.

The three people at the end of this line held signs that said:
“If you don’t vote”
“You’re stuck with”
“What you get.”

A lot of people honked.
They liked it and went to work less grumpy.

And just for once – wouldn’t be nice to have someone different running for office then the same people every time?

I was hanging out in the hallway a couple of days ago, wasting taxpayer money by gossiping with a co-worker.

Gossip is good.
There’s usually a small shred of truth in it and it helps one decide when it’s time to zig or zag.

But this isn’t about that.

This is about my colleague saying he was getting old.
The guy is 35 for yipes sake.

It’s always nice when someone touches on a subject where I can be considered an expert.

Outside of patty melts and Dobash Cake, I know a lot about getting old.

Getting old is a series of steps.
One doesn’t wake up one day and say I’m an old putz.

Since I’ve been there you may consider me a suitable guide to the steps on the road to your future.

Unless you’re already there.
Then welcome to my world. 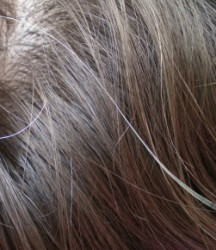 The initial trauma is the arrival of your first gray hair.

It was my early 40’s when I found mine…while doing a radio show.

It became fodder for the next two hours, including every “I’m old” record I could find.

The show was fun and quite successful so the trauma was minor and quickly forgotten.

Anyway, there’s not much else you could do about it once you get past the endless argument of whether to pluck it or not.

If you’re a woman, you can simply head to the hairdresser and say, “Make me blond.”

For guys, it’s more difficult as our manliness gets in the way.

The next step for guys is a bad one.

I crushed on a lady I met at some Friday night hangout that’s no longer around because I stopped going there.
I mentioned it to her girlfriend.

Later that night the lady said her friend thought I was too old for her.
Women can be so cruel.

I went home depressed and stayed in a funk for days. 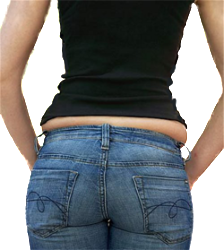 As you move into your middle 50’s some shirts will stop fitting you.
It has nothing to do with washing them in hot water.

You’re getting a gut.

Then the pants stop fitting.
You’re getting some booty and it’s hanging low.

Late 50’s – you no longer bounce out of bed in the morning.
If you ever were that disgusting type of person. 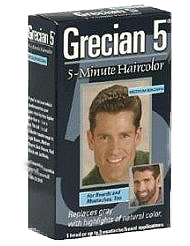 When my grey sideburns starting climbing to the top of my head I dumped a bottle of Grecian Formula on myself.

I went from salt-and-pepper to jet black.
You know you can’t wash that stuff out?

I went and got a crew cut.

Now I really look ridiculous, but my hair was back to its grey.

The 60’s are okay because you don’t care any more and you figured you earned every one of them.

I hear the 70’s are better because you don’t remember.
Anything.

I’m looking forward to it and so will you when you get to my age.

There’s an old saying…
Doing the same thing over and over expecting a different outcome is the definition of insanity.

Not true, of course.
Otherwise 80-percent of our friends and every politician would be on heavy-duty meds.

Case in point is my relationship with Zippys and Big City Diner.

Its gone to hell but I keep giving them just one more chance.
And one more, and one more.

To say it keeps disappointing me would be an understatement.

Getting back to Big City Diner – we have to start off with the story of the patty melt. 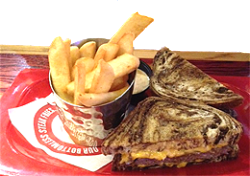 Now, a patty melt is a specific type of burger.

It consists of a hamburger patty and Cheddar or Swiss cheese along with a hint of onions between two slices of grilled rye bread.

I don’t know who invented it but he or she is a hero in my eyes.

This is from Red Robin in Vegas.

When done well, it’s heaven in your mouth.
The patty melt, not the picture.

There are two places I’ve found that do it right.

One is Sam’s Place at the Navy-Marine Golf Course and the other is Red Robin in Las Vegas as noted above.
The Yum Yum Tree used to make great ones but they disappeared eons ago. 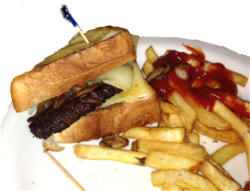 The Big City Diner sells what it calls a Sista Patty Melt.

They can make what they want but shouldn’t call it something that it isn’t.

It ain’t a patty melt and it ain’t my sista.

It bears no resemblance to the delightful picture above.

I have no idea what it is – except bad.

Bad enough it should be on Zippys’ menu.

That is an actual picture of the suspect – taken when I had to pause to settle my nerves and find the strength to continue.

The first time I had their patty melt, I was amazed in a bad way.

A hamburger patty with jack cheese, way too many mushrooms, onions, a big glob of Thousand Island dressing all squeezed between two pieces of Texas Bread – whatever that is – held together with some toothpicks.

It had somewhat of a sour taste.
Maybe the salad dressing.

It wasn’t a patty melt.
Not even close.

It was a gut bomb.

For those who have lived a sheltered life, here is the Urban Dictionary definition:

A gut bomb is usually a super-sized fast food or greasy spoon diner food item that, when ingested, immediately explodes in your gut, decimating your stomach lining.
The item usually has a very short (but painful) residence time in your digestive tract before performing a rapid exit to the outside world, and being released back into the wild.

Now you too can do restaurant reviews with authority.

Anyway, a month or so later we went back and stupid me ordered it again.
I always give people and things a second chance.

It was as bad as before.
It’s nice to see some consistency in this world.

Being a person that never learns my lesson, I gave it a shot again last week, this time saying no Thousand Island dressing.

That was the same night my wife called me “old”.
I should have known things were not going to turn out well.

It was only marginally better.

The problem is there aren’t many positives so getting rid of one negative doesn’t help that much.

There’s nothing wrong with throwing a bunch of stuff together to see what you get.
I do that all the time.

You should see some of the stuff I’ve built in my garage.

But I don’t hang it on a poster and invite people to buy it sight unseen.

Then again there’s no excuse for me to keep ordering it – expecting it to get better.

This whole thing is making me grumpy.

Their fried rice is good though.